Good review of an excellent book that gives a clear history of the death penalty in the U.S. in recent decades.

Furman v. Georgia is among the oddest Supreme Court cases in American history. Decided in 1972, it struck down every death penalty statute in the nation as then practiced without outlawing the death penalty itself. The ruling, based on the constitutional protection against “cruel and unusual punishment,” stunned even the closest court watchers. The death penalty seemed impregnable. It was part of the bedrock of America’s legal system, steeped in the intent of the founders, the will of most state legislatures and the forceful — if occasional — rulings of the courts. 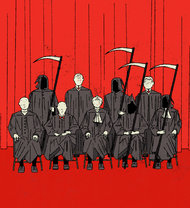 The 5-4 vote in Furman reflected a striking political split: all five members of the majority were holdovers from the Warren Court, known for its liberal decisions, while all four dissenters were recent appointees of Richard Nixon, who had won the White House with a carefully orchestrated law-and-order campaign. And notably, each justice wrote his own opinion in Furman, meaning there was no common thread to the case, no controlling rationale. The decision ran to several hundred pages, the longest handed down by the court at the time.