A Christian Perspective on the Death Penalty

Home / Resources / A Christian Perspective on the Death Penalty

The Death Penalty: A Christian Perspective 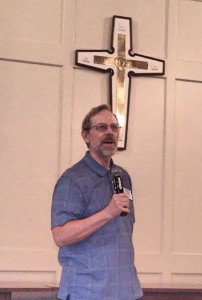 The unbearable religion of ‘an eye for an eye’

We have been looking at Jesus’ confrontation of religious leaders who placed heavy burdens upon people already “tired and heavily laden.”  Much of what was “said to the men of old” (Matt. 5:21 RSV) was either tradition that benefitted the system or mere trivia.

Some of those “old men’s sayings” had been useful at one time, but no longer so. Take, for example, the Old Testament principle of “an eye for an eye.” Originally, it was helpful; namely, when it replaced the previous practice of “one eye, plus an arm and a leg, for an eye.” That’s an exaggeration, but the point is that the original “old saying” was to match the punishment with the crime.

Jesus’ rejection of that principle is clear: “You have heard it said: ‘an eye for an eye and a tooth for a tooth,’ but I say unto you…” (Matt.  5:38). A paraphrase might be: “You heard it then, but I tell you now…” Through a “then vs. now” contrast, Jesus established himself as interpreter and corrector of Old Testament criminal justice.

Actually, “eye for eye, tooth for tooth” is shorthand for an entire verse: “…the punishment shall be life for life, eye for eye, tooth for tooth, foot for foot, burn for burn, wound for wound, bruise for bruise” (Exod. 21:23-24). In the heat and pain of conflict, who would not want to “raise the ante” a notch when merely “getting even” (“wound for wound”) does not feel sufficient? The balance prevented taking a hand for a tooth, or an eye for a bruise, or a life for a burn. In such situations, the law was  valuable.

Yet, it was often impractical. What if someone taking another’s eye had only one eye originally? What if the one being burned loves and forgives the offender; say, one’s family member? What if the one inflicting a wound has already calculated that receiving such a wound would be “worth it”? Are life’s bruises really felt equally so that “return bruises” can be measured and handed out?

The unbearable religion that takes ‘a life for a life’

Jesus was steeped in the Old Testament, including its demand that: “Whoever sheds the blood of man, by man shall his blood be shed” (Gen. 9:6). He also knew the requirement that: “If a man schemes and kills another man deliberately, take him away from my altar and put him to death” (Exod. 21:14; Num. 35:31).

Moreover, he would be familiar with the punishment of: “life for life, eye for eye, tooth for tooth, hand for hand, foot for foot, burn for burn, wound for wound, bruise for bruise” (Exod. 21:23-24). He would also have read the command to “Show no pity…” at the executions (Deut. 19:21).

Reading each of these accounts, would Jesus really “have no pity” for the individuals losing their lives? Can we imagine him thinking: “Good. They deserve it. No mercy from me!”? Of course not. He loved them and died for them.

Accordingly, Jesus put these passages in brackets with a “past vs. present” pronouncement: “You have heard that it was said: ‘an eye for an eye and a tooth for a tooth,’ but I say unto you…” (Matt. 5:38).

How is it that we still keep “life for life” when he tossed it out?

We saw last week that Jesus put the Old Testament death penalty statutes in “past vs. present” brackets, nullifying their implementation (Exod. 21:23-25;  Matt. 5:21-48, esp. v. 38). Two perspectives likely led him to such legislative repeal (Matt. 5:17): a) their content and b) their application.

A. Content. First, death was the penalty for working on the Sabbath, cursing one’s parents, cursing God, witchcraft, some forms of prostitution, a woman’s lying to her future husband about her virginity, sacrificing to false gods, kidnapping, adultery, etc. Really now! If we have qualms about any of these, we can understand how Jesus “fulfilled” them, rendering them “accomplished” (Matt. 5:17-18); that is, finished…done!

Another case for repeal of such statutes comes from the New Testament where the following examples of “wickedness” made people “deserve death”: greed, envy, strife, deceit, malice, gossip, arrogance, boasting, disobedience toward parents, faithlessness, ruthlessness, heartlessness…” (Rom. 1: 28-32). If, indeed, “The wages of sin is death” (Rom. 6:23), including character flaws, who among us would remain to conduct the executions…and the funerals?

B. The application of the death penalty in the Old Testament bears the same criticism that it does today. The rich and powerful often “get away with murder.”  Moses and David were two people whose murders and privileged status Jesus noticed in Scripture.

“Glancing this way and that and seeing no one, he (Moses) killed the Egyptian and hid him in the sand…When Pharaoh heard of this, he tried to kill Moses but Moses fled…” (Exod. 2:11-15, esp. vv. 12, 15). Notice the premeditation (looking around), the cover-up (burying the body), fleeing the scene, and the government’s incompetent attempt at capital punishment. Did his royal family connections help Prince Moses (Exodus 2:1-10) escape justice?

Some would reduce Moses’ charges to manslaughter, a couple of misdemeanors, and probation. “Prince” Moses, grandson of Pharaoh, could afford such a legal strategy, but the average “citizen” (slaves, back then) could not— like many today. Indeed, what do we become by joining his defense team and forgetting the deceased Egyptian and his family?

And what about King David?

The unbearable religion of ‘divine rights’

Movie producer and actor, Mel Brooks, gave us a line that explains much of the problem with the death penalty—both in the Old Testament and today. In his 1981 comedy, “History of the World—Part One,” Brooks portrays a tyrannical king during the French Revolution, one who abuses his subjects to meet his egotistical needs. During numerous scenes of treachery, Brooks turns to the camera, grins with sheepish delight, and proclaims: “It’s good to be the king.”

David’s adultery with Bathsheba is table talk today. Less well known is his subsequent royal murder of Uriah, her soldier husband, away on combat duty.

Knowing that Bathsheba was a vulnerable military wife, King David sent royal emissaries to bring her to him. Later, after notifying him that she is pregnant, David misuses his royal power again to send Uriah home for a while to make him appear to be the father. However, Uriah’s loyalty to his fellow soldiers in battle leads him to avoid intimacy with Bathsheba—to not even go home, but to sleep in the barracks of the palace guards.

To overcome this setback, King David orders Uriah’s superior officer: “Put Uriah in the front line where the fighting is heaviest, then retreat and let him be killed” (2Sam. 11:14-15 GNT). Afterward, he covers up the murder with a majestic explanation: “You never can tell who will be killed in battle” (v.25).

Enter now the figure of Nathan, official court prophet, who confronts the king with his crimes (2Sam. 12:1-24). David confesses and receives forgiveness: “The Lord forgives you; you will not die” (v. 13-14).

Mel Brooks is right. When it comes to the death penalty for the rich and powerful, it is good to be the king! But many today are neither rich nor powerful, having no “divine rights” over the death penalty. Is there no “Nathan” for them?

‘Reasoning together’ about the death penalty

We conclude our series on the religious burden of capital punishment with some practical issues that it raises. These, too, are religious in that sound reasoning about practical implications are Biblical (Isa. 1:18; Prov. 2:1-6).

This information comes from Virginians for Alternatives to the Death Penalty on their website vadp.org. After hearing a presentation by their Executive Director, Stephen Northup, and talking further with him, I have joined and support this organization and its mission of “educating the public about alternatives to the death penalty.” Some of their reasons for opposing it are:

1. The death penalty discriminates against: the poor, people of color, and people from rural areas. The Virginia Joint Legislative Audit and Review Commission of Capital Punishment found that a person is over three times as likely to be sentenced to death when the victim is white than when black. The Death Penalty Information Center reports that, in the United States, interracial murders and sentencing break down as follows: white defendant/black victim brought 15 executions while black defendant/white victim brought 228 executions.

2. The death penalty is ineffective. Numerous studies have shown that it does not deter crime. (Therefore, many Biblical death penalty adherents have given up on its deterrence and settle for “Old Testament justice”: “life for life, eye for eye, tooth for tooth, hand for hand, foot for foot, burn for burn, wound for wound, bruise for bruise ” (Exod.21:23-24) even though Jesus rejected it in Matt. 5:21-48, esp. v. 38).

3. Since 1973, 140 people have been exonerated from death row in the United States. However, new DNA evidence and groups like the Innocence Project Clinic at the University of Virginia Law School cannot undo the “ultimate price” paid by someone who is later proven to have been innocent of the crime (see “innocence clinic” at www.law.virginia.edu).

4. No “financial analysis” can measure the harm done by wrongful executions. However, numerous states have studied the cost of sentencing someone to death versus that of life imprisonment. Surprisingly, the death penalty is more expensive to taxpayers than the maintenance of life imprisonment.

Articles originally printed in the Waynesboro News Virginian from July-August 2012. Rev. Russell G. Waldrop, D.Min., LPC-S, is a pastoral psychotherapist in Waynesboro, VA. Contact him at 540-256-1147, at russwaldrop@yahoo.com, or visit RussWaldropCounseling.net.