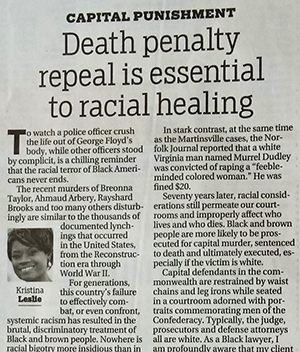 Good news is especially rare and welcome during these tumultuous times in our nation.

In the last few weeks VADP has accelerated its messaging and abolition advocacy in the Commonwealth and nationally:

Prospects have never been better for ending capital punishment in Virginia. Our work over the past five years has produced growing political support for abolition among conservatives, murder victim family members, and prosecutors.

The widespread calls for criminal justice reform in the wake of the police killing of George Floyd earlier this year have inspired great support for abolition among numerous Virginia state legislators.

Our Senate abolition sponsor is confident that we have the votes to pass abolition in the Judiciary Committee and on the Senate floor. In the House of Delegates leaders in the Courts of Justice Committee have agreed to patron abolition.

We are working hard to ensure that there is majority support for death penalty abolition among House members. Field Director Dale Brumfield is arranging virtual meetings with members of the state legislature to discuss our campaign. So far we have spoken with 20 of the 100 Delegates with many more meetings scheduled in the coming weeks.

We are also proceeding with plans for our Annual Awards Luncheon that will be held virtually on Saturday, October 24. Look for more details soon.

We are pressing on, as we must, during these enormously challenging times. As always, we are grateful for your support.