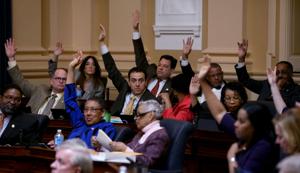 BOB BROWN/TIMES-DISPATCH Democratic members vote for an amendment to SB1393, the bill of Sen. Richard L. Salslaw, D-Fairfax, dealing with keeping the drugs used for lethal injection a secret, during the floor session of the Virginia House of Delegates at the State Capitol in Richmond, VA Tuesday, Feb. 24, 2015. After the amendment failed, the bill later was rejected 56-42.

The House of Delegates voted 56-42 Tuesday to defeat a measure that would have shrouded Virginia’s lethal injection process in secrecy.

Gov. Terry McAuliffe’s administration had backed the legislation that would have allowed the state to prevent public disclosure of the drugs used in lethal injection executions and the drugs’ manufacturers.