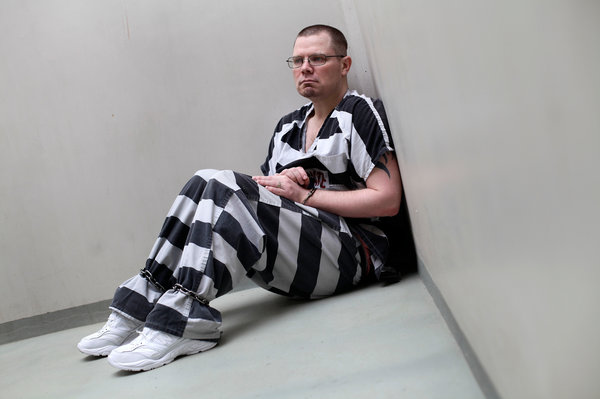 Patrick Bearup, 36, at the Fourth Avenue Jail in Phoenix, received the death penalty after he was convicted of kidnapping and first-degree murder.

PHOENIX — Members of a white supremacy group descended on a home here 11 years ago to scare a man into paying back the $200 his roommate had accused him of stealing. The attack ended in the man’s death.

Three of the four people who were eventually arrested brokered plea deals, avoiding a trial. The roommate, Jessica Nelson, 37, who instigated the beating, and a skinhead recruit named Jeremy Johnson, 30, who pummeled the man, Mark Mathes, with a baseball bat, could be out of prison in four years. Sean Gaines, who shot Mr. Mathes as he was thrown naked from a car onto a county road, is scheduled for release in 2028, at the age of 47.

Only one of the perpetrators, a young man who by all accounts was not directly involved in the killing, received the death penalty. Patrick Bearup, 36, who helped dispose of Mr. Mathes’s body and severed one of its fingers to retrieve a ring, was convicted of kidnapping and first-degree murder.