Virginia wants to hide “all information relating to the execution process.” 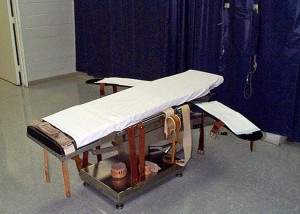 A series of botched executions in Ohio, Oklahoma, and Arizona last year raised serious new questions about how death penalty drugs are administered. They have drawn fresh scrutiny from the Supreme Court itself, which agreed last month to assess whether a lethal injection cocktail used in Oklahoma violates the Eighth Amendment ban on cruel and unusual punishment. A month ago Ohio announced that officials would stop using one of the drugs in the current protocol, midazolam, after a botched execution involving untested drugs last year. And on Friday, Ohio Gov. John Kasich announced that the state would postpone all seven scheduled 2015 executions, partly because of questions surrounding the controversial drug cocktail Ohio had been using.