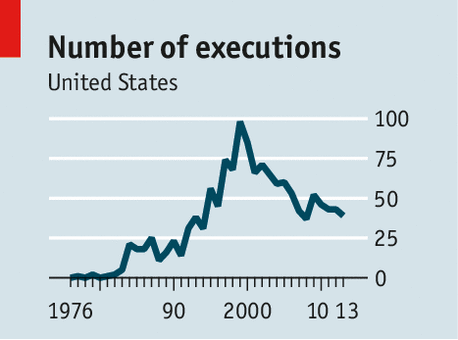 NEW HAMPSHIRE has just failed to abolish the death penalty—by one vote. Given that the Granite State has not actually executed anyone since 1939, you might think this doesn’t matter much. But, obviously, it matters to the one man on death row in New Hampshire, a cop-killer called Michael Addison. It matters, also, to the broader campaign to scrap capital punishment in America. And despite the setback in New Hampshire, the abolitionists are slowly winning.

America is unusual among rich countries in that it still executes people. It does so because its politicians are highly responsive to voters, who mostly favour the death penalty. However, that majority is shrinking, from 80% in 1994 to 60% last year. Young Americans are less likely to support it than their elders. Non-whites, who will one day be a majority, are solidly opposed. Six states have abolished it since 2007, bringing the total to 18 out of 50. The number of executions each year has fallen from a peak of 98 in 1999 to 39 last year (see article).