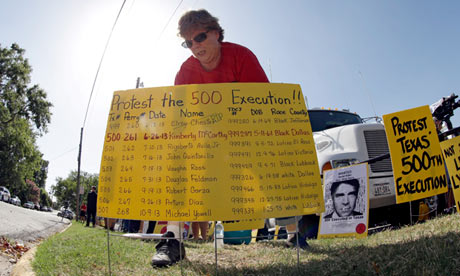 A protest against the execution of Kimberly McCarthy outside the Huntsville unit of the Texas department of criminal justice. Photograph: David J. Phillip/AP

When Texas crossed the gruesome milestone on Wednesday night by executing its 500th prisoner the news carried a particular punch for Anthony Graves. He could so easily have been one of them.

Two years ago he was exonerated and set free after spending 18 years in Texas prisons, most of that time on death row. His conviction for multiple murder was overturned after an appeals court learned that his case was riddled with problems including a co-defendant who admitted to lying about his involvement, prosecutors who had extracted false confessions and crucial testimony withheld from the defense.