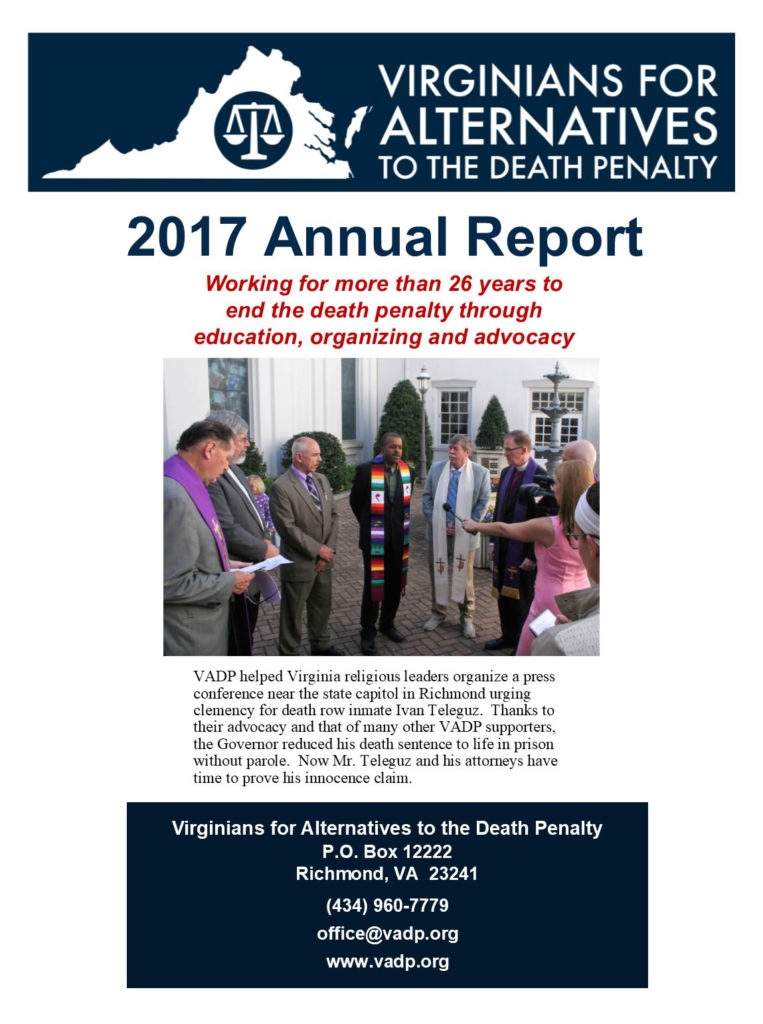 Virginians for Alternatives to the Death Penalty (VADP), the state’s only organization seeking death penalty abolition, released its 2017 annual report that highlights progress made toward limiting capital punishment in the state.

In 2017 two prisoners saw their death row sentences commuted by Governor Terry McAuliffe to life in prison without parole, reducing the state’s death row population to three – the smallest number in a quarter-century. In addition, there were no new death sentences in Virginia for the sixth consecutive year.

Unfortunately, the Commonwealth did carry out two executions in 2017, raising the number to 113 since l976. Virginia now ranks second only to Texas (546) in executions. Since that time over 160 prisoners have been released from death row nationally, because they were later found innocent of the crime for which they were convicted.

In the annual report, VADP President Virginia Podboy commended the state’s capital defense attorneys for their work representing those charged with capital crimes. “They are true warriors for an improved criminal justice system.” She also said VADP’s financial support rose significantly and its annual awards luncheon saw a substantial increase in attendance.

Executive Director Michael Stone said VADP is focused on legislation that would exempt people with severe mental illness from the death penalty. A bill was introduced in the General Assembly in 2017, falling a single vote short in the Criminal Law Subcommittee of the Virginia House of Delegates.

During the year VADP hired Field Director Dale Brumfield to conduct outreach in the western and southern areas of the state, building support for reform and abolition of capital punishment.

The report also includes statements supporting VADP’s work from four individuals who object to capital punishment. They are: Cliff Maloney, President of Young Americans for Liberty, a limited government advocacy group; Dave Knight of Alexandria, whose brother was murdered; Rachel Sutphin of Christiansburg whose father was killed, but who asked the Virginia governor for clemency for the assailant; and Rev. Connie Clark of Earlysville, who has served as chaplain in two state psychiatric hospitals.

Virginians for Alternatives to the Death Penalty (originally Virginians Against State Killing) was formed in l991 when 22 individuals opposed to capital punishment met to work toward ending executions in the state. VADP is classified as a 501(c)(3) nonprofit organization.