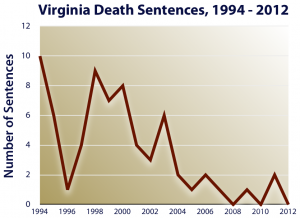 This graph from the Death Penalty Information Center shows Virginia’s trend in new death sentences from 1994 to 2012. Data prior to 2011 come from the Bureau of Justice Statistics’ annual report on capital punishment. 2011 and 2012 data are from DPIC’s research. See all state death sentences by year here.

In Virginia, there are currently eight people on death row, there has been one execution in the past year and a half (there were 13 in 1999 alone), and there have been fewer death sentences in the past five years than during any period since the 1970s.  There are several explanations for this trend:  declining murder rates, more effective representation from public defenders and prosecutors being less likely to seek, and juries being less likely to impose, a death sentence.  As the public learns how the capital punishment system actually works – especially its fallibility and perceived unfairness – imposing an irreversible penalty becomes increasingly less acceptable.