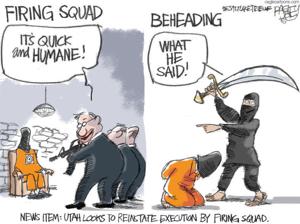 The Rev. Gene B. Edmunds Edmunds, a retired Presbyterian minister, representing the Alternatives to the Death Penalty Committee of Plowshare Peace Center.

By the Rev. Gene B. Edmunds

Utah Gov. Gary Herbert recently signed a law reinstating the firing squad as a means of execution. Even Gov. Herbert has acknowledged that killing someone by firing squad “is a little bit gruesome.”

He believed the law was necessary because Utah, Virginia and the 32 other states where the death penalty is still legal are having trouble obtaining the drugs used for lethal injection from Europe. Use of other drugs has proved disastrous, as in the “botched execution” in Oklahoma that made headlines last year.

Most European countries, and 140 countries worldwide, have already abolished the death penalty. As a result, many European manufacturers object to the use of their drugs by the U.S. in executions. And they are becoming increasingly difficult to obtain after an EU trade embargo in 2010.