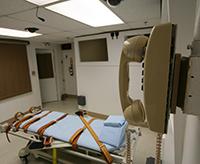 A list of so-called “warrant-ready” death row inmates has been delivered to Florida Gov. Rick Scott as required by the state’s Timely Justice Act. Although the list comprises a third of all death row inmates, one capital punishment expert says they would have been eligible even without the new law. That brings the law’s efficacy into question.

As required by the law, Gov. Scott Friday received a list of 132 death row convicts. The Florida Legislature enacted the Timely Justice Act this year with sponsors saying it would cut down on frivolous appeals and move people through the capital punishment process more quickly. Protesters said it would create a flurry of new death warrants and could lead to innocent people being denied the chance to prove it. But the law does not require the governor to act more quickly.