William Morva executed by injection for murders in Southwest Virginia 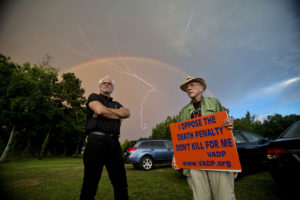 JARRATT — William C. Morva was executed by injection Thursday night for the capital murders of an unarmed security guard and a deputy sheriff during an escape in Montgomery County in 2006. Morva, a 35-year-old former Chesterfield County resident whose lawyers said suffered from a chronic psychotic disorder, was pronounced dead at the Greensville Correctional Center at 9:15 p.m. Read More >>