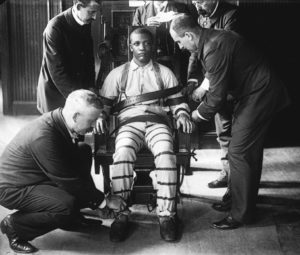 Virginians for Alternatives to the Death Penalty has been fighting the racism and brutality infecting the criminal justice system since our inception in 1991.

Sadly, once again, with the horrific murder of George Floyd we are reminded of these outrages. And we are again committed to their eradication.

In 2000, the Joint Legislative and Review Commission (JLARC) published a Review of Virginia’s System of Capital Punishment. Researchers found that a person is more than three times as likely to be sentenced to death when the victim is white versus when the victim is black.

In 2003 the ACLU Capital Punishment Project released Broken Justice: The Death Penalty in Virginia. It found that the JLARC study underestimated the impact of race in Virginia’s death penalty system.

Of the 1,390 documented executions carried out in Virginia since 1608, only four involved a white person killing a black man or woman, all of them since 1997.

Thus, it took 390 years for the Virginia criminal justice system to determine that the life of a black person, in limited circumstances, was equivalent in value to that of a white person.

The death penalty is a poster child for everything wrong with our criminal justice system – blatant racial disparities, police and prosecutor misconduct, and the propensity for convicting innocent men and women.

While in Virginia we can see the abolition of the death penalty in the near future, addressing the deep-seated issues of institutional racism and lack of accountability for police and prosecutor misconduct are deeper challenges.

However long and difficult the journey, VADP stands united with activists and protesters using their Constitutionally protected rights to petition government.

We urge all of those who believe capital punishment is a gross abuse of power to join us as we salute those on the front lines of change.

Conservatives Opposed to the Death Penalty

This was the third in a series of Abolition University education sessions for VADP supporters. This event focused on Conservative Opposition to the Death Penalty.

One national leader and two conservative leaders here in Virginia shared their stories for this session:

Hannah talked about the rapidly increasing number of Republicans coming to oppose capital punishment across the country, leading abolition efforts in many state legislatures. Chris and Nick shared their own reasons for joining the death penalty abolition movement. Dale talked about the warm reception that he has received from conservative audiences here in the Commonwealth of Virginia.

This was the second in a series of Abolition University education sessions for VADP supporters. This event focused on the Role of Murder Victim Family Members in the Death Penalty Abolition Movement.

One national abolition leader and three victim family members in Virginia shared their stories for this session:

Renny described how murder victim family members like him first became involved in the death penalty abolition movement and how they fundamentally altered the public policy debate in state legislatures, paving the way for ending capital punishment in multiple states. Linell, Dave, and Rachel shared their personal stories of loss and their involvement in abolition work here in Virginia.